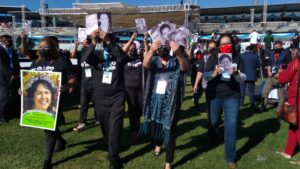 Tegucigalpa, Honduras. – After 12 years of dictatorship the new president of Honduras, Xiomara Castro, laid out the new governments’ agenda in her inaugural address, listing 22 points including several human rights issues.

25 thousand people from all over the country and 29 international delegations attended the inauguration of Castro as the first woman President of Honduras representing the LIBRE Party, the political arm of the National Front of Popular Resistance (FNRP) which was formed following the coup de tat that overthrew her husband José Manuel Zelaya.

The Committee of the Families of the Detained and Disappeared in Honduras (COFADEH), convened over 300 people who processed around the National Stadium wearing t-shirts that said “no forgetting and no forgiveness” as part of the ceremony for the transition of power.

They held up photographs of family members, friends and compañeros murdered by the dictatorship in the resistance struggle after the coup from 2009-2010, following the electoral fraud in 2017 – 18; in defense of healthcare and education in 2019; suspension of constitutional rights during the covid -19 pandemic and those disappeared in this same context.

The act of acknowledging the names of the martyrs in this solemn act was an act of reparation for participants, as it also was to be seated in front of the stage where previous governments have seated the Armed Forces and the Police, those who are the main perpetrators of political murders.

President Castro laid out 22 points that she will enact to assure that after 12 years of struggle, people enjoy justice, freedom, social and economic welfare and human rights.