Standing Up for Human Rights in the Bajo Aguan 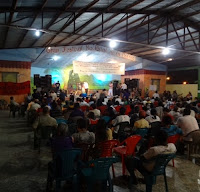 This past Sunday marked the end of an incredible demonstration of solidarity with the people of the Bajo Aguan. The International Human Rights Encuentro (conference) in the Bajo Aguan lasted from the 17th to 20th of February. We accompanied Honduran groups traveling to the event and were present for the encuentro and visits to communities in the Aguan Valley. Over the next couple weeks we will be posting more on the event and sharing stories of those affected by human rights abuses.

The coordinators of the encuentro were expecting a few hundred participants but over a thousand people from across the world came to bear witness to the struggles of the campesino movements and human rights violations that they have suffered. Campesino movements from Brazil, El Salvador, and other parts of Central and South America arrived to share their experiences and struggles. Independent media from Argentina to Louisville, Kentucky documented the event. Honduran human rights defenders, indigenous and Afro indigenous rights organizations, feminists, unionists and other social movements came together from across the country.

WE BELIEVE that this situation, which is deteriorating daily, can only be explained by the interests of the capitalist, patriarchal and racist system in subjecting peoples, dispossessing them of their natural and cultural wealth and putting it at the service of the nations of the North and their transnationals. This dispossession is made possible by the accompanying process of militarization which is increasingly apparent through the foreign military occupation which safeguards colonialism, oppression and the violation of human rights which we are experiencing in Honduras in an extremely harsh and brutal form.

The United States plays an integral role in miliatrization by funding and training Honduran police and military and by expanding U.S. military bases in the country. Take action today to help end this militarization. Ask your representatives to sign on to a letter demanding the suspension of military aid to Honduras. The last day to sign on is March 1st.

Photos courtesy of Lucy Edwards and the WFP Nicaragua teams.