From Witness for Peace blog:

“The security forces have the power and the weapons. What do we have? Our voices?” Noelia Nuñez, Honduran human rights lawyer 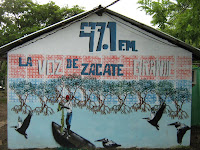 Today marks the one-year anniversary of La Voz de Zacate Grande, a community-run radio station reporting on a violent land dispute in southern Honduras. The communities of the Peninsula of Zacate Grande have been struggling to obtain legal title to their land for eleven years and the small radio station rests on contested territory. 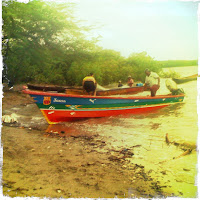 Facussé to obtain a legal title to all the land on the peninsula.

The World Bank and the International Monetary Fund promoted these reforms.

A decree passed under ousted President Manuel Zelaya intended to resolve the land disputes that arose from laws passed during the 1990s. Zacate Grande’s campesino organization, the Development Association of the Zacate Grande Peninsula, known by its Spanish acronym ADEPZA, would have benefited from the decree but states that “the coup d’état paralyzed the process. Facussé increased security on the land and the presence of security guards, police and military has multiplied.”

The decree was annulled by the Supreme Court this past January, affecting thousands of campesinos, including those of Zacate Grande.

Less than two months after the inauguration of La Voz de Zacate Grande, the community reported that the station was surrounded by hundreds of police and military in an attempt to shut it down. Last month the director of the radio, Franklin Melendez, was shot in the leg. Later the same day another community member involved in the radio was reportedly threatened in front of witnesses. The police did not respond in either instance. Just last week eight community members involved in the land dispute and active with La Voz de 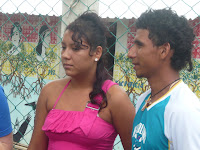 Zacate Grande received capture orders for disobedience against the State. Witness for Peace’s International Team spoke with one of the accused, who stated that they are currently in hiding.

Community members involved with the radio station, including youth, have also received threats over the past year, including death threats. The community leader and one of the station founders said that the government has not taken action to ensure their protection. However, they have received support and accompaniment from national and international NGOs such as COFADEH, the True Commission, the Honduras Accompaniment Project, Witness for Peace and Italian solidarity groups.

The landowner in dispute with the communities of Zacate Grande is also in the midst of a conflict in Bajo Aguan, in northern Honduras, which recently became deadly. This week a German development bank pulled a $20 million loan to Facusse for his African palm oil business due their concerns for human rights. Other international financial institutions, including the World Bank, still have investments in the business. 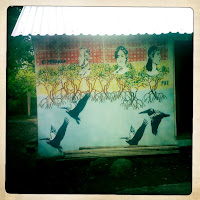 The situation in Zacate Grande illustrates several issues facing civilians throughout Honduras: increased military and police presence, a lack of trust in security forces, threats to journalists and dissidents and the struggle for basic rights. The United States continues to expand funding to the Honduran security forces and push for legitimization of the Honduran government despite the human rights concerns associated with those bodies.

Witness for Peace Nicaragua brought two delegations to Zacate Grande last August and September, meeting with representatives of the radio station. A full report on the delegation’s findings and the history of the struggle in Zacate Grande is forthcoming.