Original version of this article in Spanish can be found on the Mio Aguán blog here.

The Permanent International Observatory for Human Rights in the Aguán once again denounces the climate of repression prevailing in the Aguán Valley on the north coast of Honduras.

In the region there has been no truce in the implementation of repression and uninterrupted military operations against the community of Rigores and the campesino settlements of Marañones on the left bank of the Aguán river. There has been an increased number of private security guards traveling in national police patrol vehicles, as part of Honduran army commands, and in civilian vehicles without license plates along highways throughout the Valley.

In the last several days at least five campesinos from various organizations have been detained even when they have proved the legality of their activities, and justice officials have attempted to send them to jail. The mayor of Bonito Oriental and various citizens from different social sectors were also detained in an effort to show that the Xatruch Commands were in fact doing something, in light of the failed military operation Tumbador, which until today has not found the guerrillas that they insisted were in the Aguán, nor the heavy armaments that they assured were in the campesinos‘ possession. Feliciano Castellanos was the last campesino detained, on December 22nd in the afternoon, and they could not decide which municipality to try him in. First they transfered him to Tocoa, then to Bonito Oriental, and finally they took him to Trujillo, all in the same department. They did not wait 24 hours to investigate the detainee in order to present him to a judge.

Since the beginning of November of this year, the campesinos of Rigores have denounced that the businessman Miguel Facusse is building a canal in the upper part of their communities and lands where he intents to divert the Juaniquilapa river, a strong branch of the Aguán river, which would affect them in the future by leaving them exposed to floods, something that has not been taken into account despite experience with these types of situations in the area.

Today, December 24th, in the morning, campesino Juan José Peralta, president of the Luz y Esperanza cooperative of the nacional recuperation movement of Rigores, who was recently detained by the police, was victim of an attempt on his life while traveling with his family. A vehicle came upon his car with the intention of knocking it into the Rigores river, which they were crossing at the time near the exit of the community of Rigores, towards the municipality of Sonaguera. Juan José was left injured and required hospitalization. Most campesino leaders on the left and right banks of the Aguán river are not able to leave to buy food because of the hired assassins, such as in the case of Juan José.

Another story that the hired killers and guards have circulated is that the Resistance and the campesinos would be left to mourn their dead during Christmas and New Years, while for the community of Nueva Vida of the campesino movement of Rigores, the threat of eviction persists over the next few days.

Today while children across the world play freely, on this piece of land our children are locked inside waiting for the moment that their settlement could be attacked or the moment when they could be evicted and thrown in the street. Today in any one of these settlements a baby Jesus might be born, and tomorrow he will be persecuted along with his parents in order to remove him from the land where he was born. But these acts depend also on your solidarity with the Aguán. Here there is no Merry Christmas in the midst of a climate of repression and fear, but we persevere and resist with the hope that there will be a better tomorrow.

Our greatest hope is that Christmas Eve will bring bread and water to the thousands of families in Honduras and in the world who don’t have anything on their plates, and that they may reestablish a peaceful existence despite the enormous difficulties generated by living in poverty and misery.

May next Christmas Eve trully be a Christmas for all.

Because the barefoot also deserve justice.

May feelings of love and solidarity this Christmas can reach your heart and convert us all into better human beings.

Spokesperson for the Permanent International Observatory for Human Rights in the Aguán, on the north coast of Honduras. 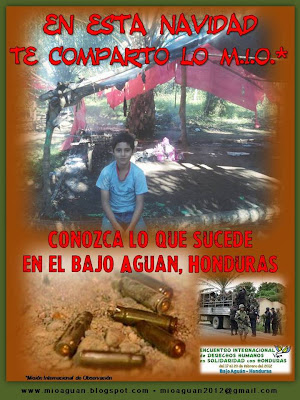